What Causes Tree Failure in Storms 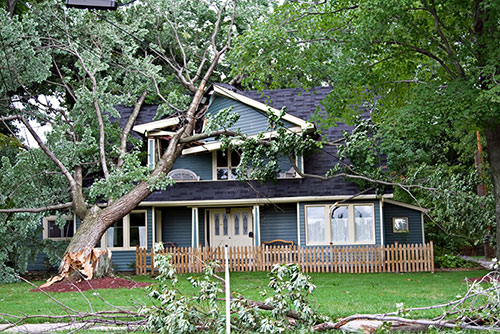 Fallen branches and trees are part of the aftermath of a tropical storm. Heavy rains and storm force winds can lead to tree failure say experts with the Alabama Cooperative Extension System. Dr. Brenda Allen, an Extension urban forestry specialist, says that there are many factors that contribute to tree failure during storms. “Trees that fall have existing issues such as internal rotten areas and a weakened physical structure,” she says. “The physical structure could be weak for a number of reasons including past storm damage, incorrect pruning or being a species known for structural issues like the Bradford pear.” Allen also says that trees around homes and in home lawns often have a shallower root system than trees in forest and undeveloped areas. “Homeowners often water their landscape with frequent, light watering. This can encourage shallow root development. Surface roots are more subject to mower and equipment damage, creating easy access for insects and disease. This will weaken and compromise the health of the trees.”

Lee County Extension coordinator Chuck Browne remembers the 1995 hurricane, Opal. “When Opal plowed through the state that year, the first trees to fall had a lot of leaves creating wind resistance and compromised root systems,” says Browne. Given that much of Alabama has been experiencing drought conditions for many months, some people have wondered if drought conditions could lead to greater tree failure in hurricane and tropical storm events.

Beau Brodbeck, an Extension forestry regional agent, says he does not believe there is a correlation between a one-year drought and root failure during storms. “Root failure is more a factor of tree species, soil type and previous damage,” he says.

Brodbeck adds that changes to stand density can affect trees’ storm resiliency. “Homes located in pine stands that have been thinned in the last two or three years are at risk,” he says. “They have not developed sufficient tension and compression wood to withstand lateral winds.” He says home owners should look for tall spindly pine trees with the crown bunched at the top of the tree. These are the kind of pines that could be a problem.

Extension forester Dr. Ken McNabb says drought causes trees to die from the top down, not from the bottom up. “The leaves would fall first, and then branch tips would die,” says McNabb. “The roots would be the last thing to die from drought conditions as they are the part of the tree closest to any water that is available. In fact, drought-stressed trees may have fewer leaves reducing wind resistance.”

Dr. Kassie Conner, an Extension plant pathologist, echoes her colleagues’ points about disease as a contributing factor to tree failure. “Trees that fall often have some type of internal damage that is not visible externally,” says Conner. “They may have heart or root rot. For example, oak root rot, a disease of mature oaks, is not always noticeable until the tree has been uprooted. We usually recommend removing severely damaged or diseased trees at the first sign of damage to prevent structural or human hazards.”

Brodbeck adds that even healthy pecan trees could be especially vulnerable to storm winds at this time of year. “They generally fair poorly in storms,” he says. “Given that it is just now approaching harvest time, the added weight of a large nut crop could increase the tree’s risk to high winds.”